While not an official meteorology term, it does describe a well-known process.

“Pineapple Express is a non-technical term for a meteorological phenomenon characterized by a strong and persistent flow of atmospheric moisture and associated with heavy precipitation from the waters adjacent to the Hawaiian Islands and extending to any location along the Pacific coast of North America. A Pineapple Express is an example of an atmospheric river, which is a more general term for such narrow corridors of enhanced water vapor transport at mid-latitudes around the world.” – Wikipedia.

In English, the weather pattern we now see indicates that storm after storm in the North Pacific will be hitting the west coast of North America. These storms then ride the Jet Stream across the country and exit out into the Atlantic Ocean. Here is what Northern California is bracing for today…

These storms will travel across the southern branch of the Jet Stream right into the Piedmont.

As for weather impact, our mountains should shield us quite well as the low pressure systems will have lost most of their energy. In a previous post, we discussed some scenarios where the “Pineapple Express” could bring us winter precipitation. This first system in the series doesn’t appear to have much of an impact other than cold rain.

Now before you get disappointed, look at the next image… Shown this morning are two more Pacific storms behind this one. They are spaced about 6 days apart, so we still have opportunities for winter weather if that’s your thing. 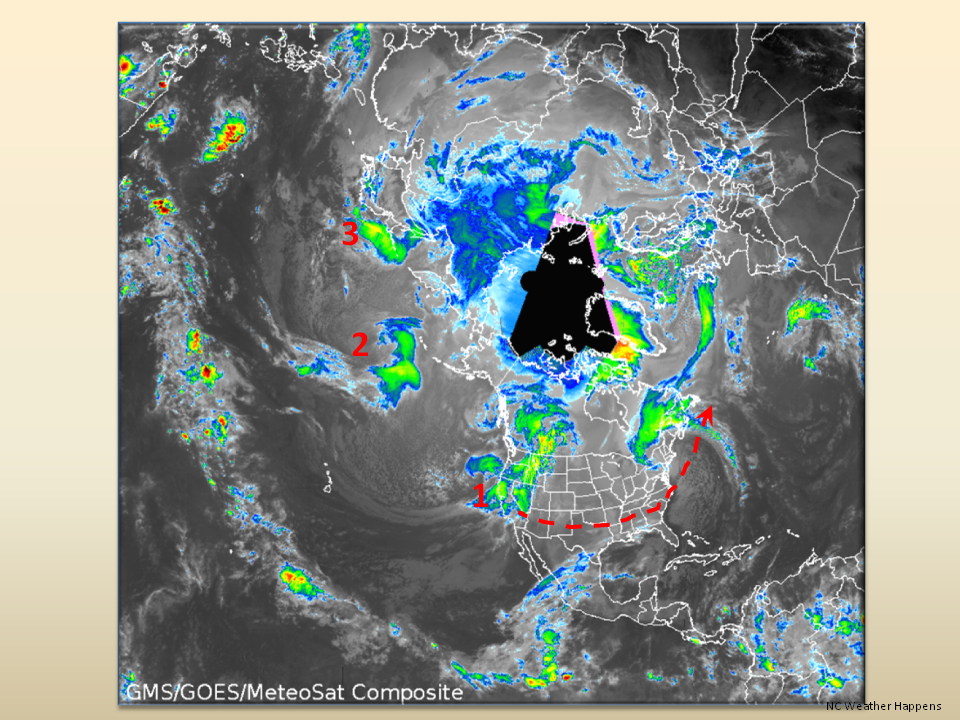 In long-range models, we just don’t see much of a change in this pattern as far out as January 30. This is what happens when we have a very warm North Pacific coupled with an El Nino…

Hopefully we have prepared you for this winter. We have given you some key terms and shown you some processes that you will hear a lot about in the news. The next 2 weeks into the New Year, will need close monitoring as these systems come through and there are no guarantees. These are very dynamic systems and travel a very long distance so we really won’t know how they will impact us until they are right on top of us.

BUT…All we need is for one to dip a little farther south to pick up Gulf of Mexico moisture and then come into our cold air…then it’s Milk and Bread time.