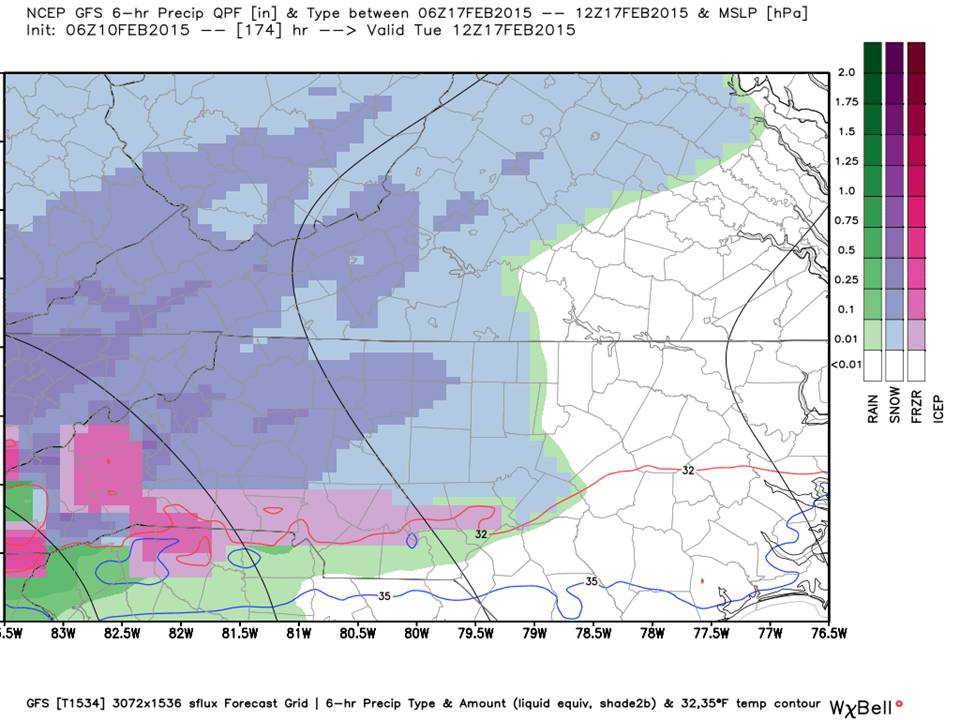 Coldest air of the winter coming this weekend and another shot at Winter Precipitation in the 7 day forecast.

By now you should already know about the Arctic Cold streaming into the Piedmont and it is forecast to be Brutal! The Wilmington NWS Office this morning used the words “Potentially Historic” to describe how cold it will be. NC Weather Happens doesn’t feel this will be “Historic” but it will be one for the books and will certainly silence those that have said “Winter is over”.

Ridging in the Northwest amplifies a trough in the Southeast allowing for polar air from the Hudson Bay to filter into the Piedmont. Alternating Clipper systems and Strong High Pressure continue to bring cold air down and send the clippers up the east coast as nor’easter.  An amplified Trough in the Southeast however, does tap some Gulf moisture, sending it NE through the Piedmont while Arctic air is still in place. Offshore high pressure builds in trying to warm us up but has trouble overcoming the continental High Pressure, so…This is a close call but looks the best so far this season.

The first thing that pops out is the trend towards Cold. We haven’t seen it in a while, but the 0 degree line is shown! Saturday night should be our coldest with temperatures well into the single digits (other resources were used to arrive at that number). The other thing that pops out is the period of Rain on the 17th while the temperatures are below freezing… This is Very Interesting! While it is too far out (7 days) to say what will happen, this would most likely be frozen precipitation.

Shown in Yellow, are our three players on Map 1.

Map 2. shows their movement and placement after 12 hours. This has been the scenario that has deprived us from winter precipitation all winter so what makes this time different? The Continental High Pressure coming out of Canada into the Plains is very strong and has the potential to keep our developing High off the coast moving on out to sea before it can’t wrap in warm Atlantic air.

With a strengthening Gulf Low forecast to move up the East coast, and cold air filtering in from the Northwest, this will make for a very interesting situation. Our first guess (this far out) would be to wait and see, but it’s in the 7 day so we have to say something about it.

At the time of this article (note the time above) this scenario suggests a precipitation type gradient across the Piedmont with Wintry Mix south and Snow north. Don’t ask about accumulation…it’s just too soon to tell (if any). We suspect in future model runs, we will see that offshore High build more and the Continental High weaken which would give us what we are used to with more emphasis on Freezing rain.

So let’s get through the brutal cold first as it will have more of an impact then we can focus on winter precipitation a little later.