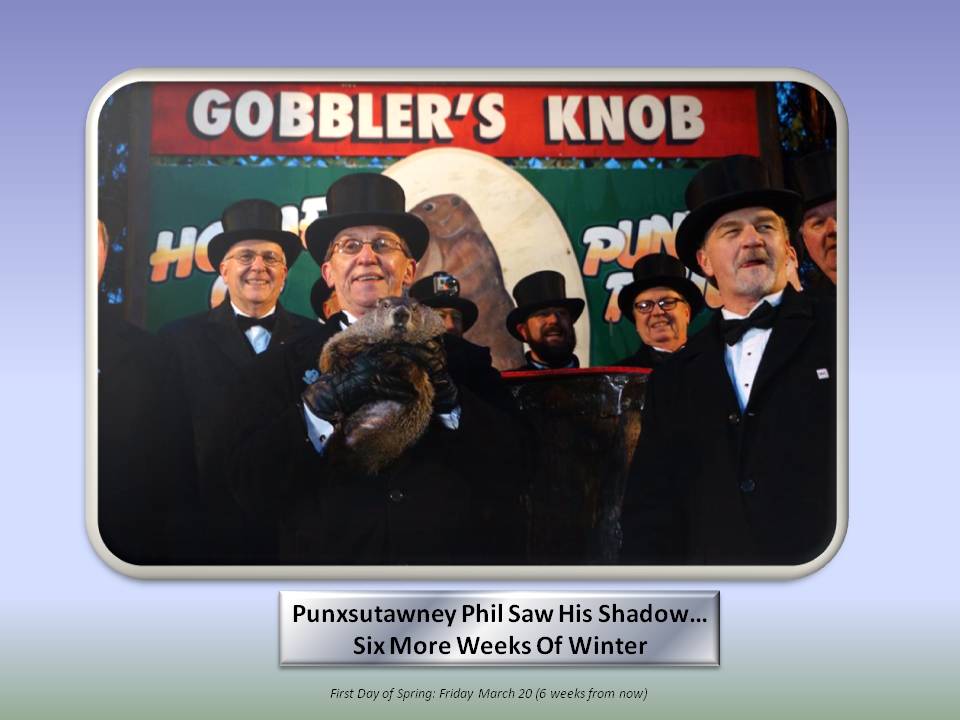 So Phil saw his shadow this morning. Great for Pennsylvania and a no-brainer, but what about the Piedmont?

Just for fun, we sent out a calendar of dates to watch for winter weather potential. Today was one of those and it has passed as a no-show (an all too common theme for us this winter). The next “opportunity” is Thursday and Friday.

A low pressure system from the gulf was originally forecast to enter the Carolinas about the same time as a strong High pressure system ushered in cold Canadian air. That High pressure is being modeled in the 1034 – 1038 mb range which models interpret by keeping our gulf Low further to the south. Further complicating the setup is a potent Low heading out to sea towards Greenland which has been shown in models to shear our Low apart.

Map 1&2. The short-range NAM model clearly shows our Gulf Low passing over the Florida Panhandle and a long area in the NE section being sheared apart. Snow develops on the western slopes of the mountains as Canadian air filters in. This scenario is much drier than the other models but does agree that Friday will be much colder with highs only in the 30’s.

Map 3. The GFS for the same time shows how the 1037 mb High is keeping our Gulf Low further to the south while still allowing a shield of precipitation into the Piedmont. The timing here is critical as this scenario makes for a Wintry Mix in the Piedmont. There is not very much moisture associated with this scenario, but Friday anything that does fall overnight fall may freeze.

Map 4. How confident are we in the track of the Gulf Low? Not very. Shown here is the model spread among all Model ensemble members (sub models inside the larger model). Depending on the model, the strength of the Plains High pressure is determining how far south the Gulf Low stays. A weaker High will track the Low more northward. Not shown is the shearing environment absorbing the Low into the stronger NE system but that would happen after Piedmont passage.

Map 5. We thought it would be interesting to put all models together beginning in November and show the pattern where Accumulating Snow has fallen in the Piedmont. This doesn’t account for freezing rain or sleet. Our mountains have had plenty and deformation bands have contributed to snow falling on our coastal plain…Mostly from last week’s system. Central NC is high and dry.

What the NWS Offices are saying:

RIGHT NOW…HAVE ONLY MODERATE CONFIDENCE IN THIS FORECAST. THE WEATHER FORECAST MODELS HAVE HAD NOT ONLY SIGNIFICANT DIFFERENCES WITH ONE ANOTHER CONCERNING THE TRACK AND THE IMPACTS OF THE LOW…THEY HAVE ALSO BEEN FLIP FLOPPING FROM THEIR PREVIOUS RUNS AS TO HOW THE LOW WILL BEHAVE. SO WILL STILL NOT HAZARD A GUESS AS TO HOW MUCH SNOW WE CAN EXPECT…EXCEPT TO SAY THAT THE WORST CASE SCENARIO PUTS ACCUMULATIONS AROUND THE LOW END OF ADVISORY CRITERIA.

We have 6 more weeks of Astronomical Winter. Phil’s prognostication is more of a reason to party than predict the weather, but it’s still fun! Back here in the real world, we are seeing our now famous line “cold chasing rain”. However, our cold is much colder and more frequent this month with Arctic cold following our event Thursday. Here’s what we think will happen…

We have six more weeks of winter…teleconnections (the interaction between ocean currents and the atmosphere) show we will likely see winter lasting a bit beyond that. That topic is jargon laced, so we’ll spare you that!