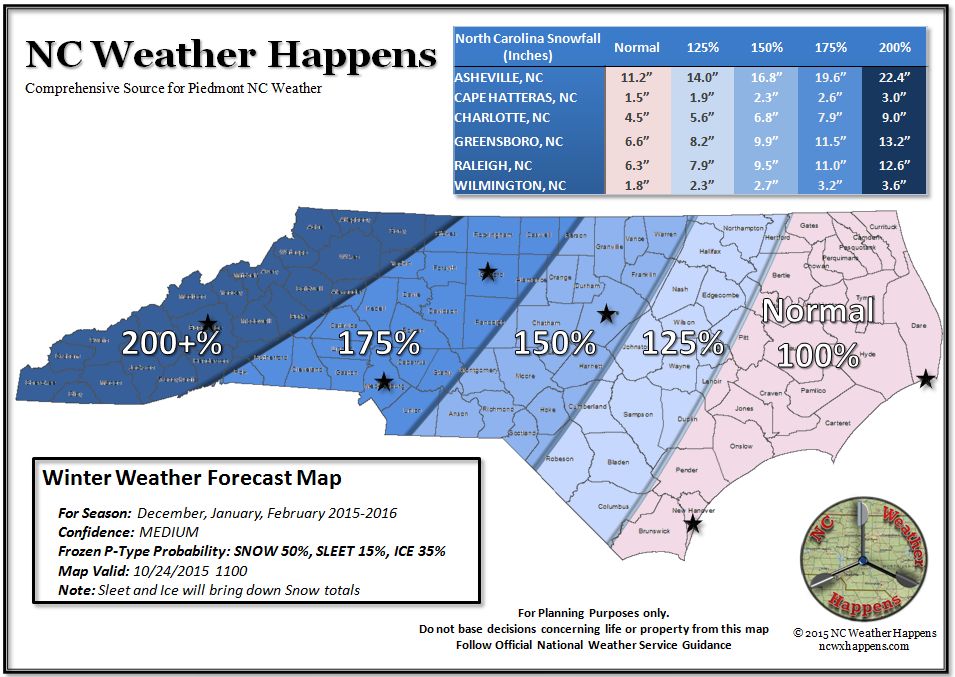 North Carolina is poised to receive higher than normal precipitation this winter as we experience the full effects of a strong El Nino. The southern jet stream has historically been nudged further south in El Nino years bringing in warm moisture laden air from the Pacific that would (in a typical winter) give NC an increased chance of winter precipitation. The northern jet stream typically remains further north keeping us a bit on the mild side during these events. Add to this that the Atlantic is very warm and we have a very challenging forecast.

We listened to you and it was unanimous that we present something you could understand. Our favorite comment: “Just tell me what I need to know. I’m not the Meteorologist!”

For this forecast, we’ll keep it simple and leave the jargon out.

If we look at the past El Nino winters from 1948 to present, none have been the same but we can see statistically how the winter should pan out. In these analogues, all the El Nino years have been put together to see what might take place. This is only one of the many other considerations that went into this forecast.

What is Normal Anyway?

As a refresher, “normal precipitation” and “normal temperature” are simply the average of all observations from the earliest record for a given span of time.

In this forecast, we will be speaking a lot about “normal” so let’s go.

Above, you can see how much snow fell by month and then totaled for the year. Meteorological Winter spans the months of December, January, and February and we will be using these averages moving forward.

Now to put that into perspective, take another look at the forecast map at the top of the page. Find your county and then look at this chart to see how much Snow you could receive based on this forecast. This is also shown on the forecast map.

Does this mean we will receive this much? Not necessarily and here’s why.

This season will feature a split jet stream with a wide spread between the northern and southern streams. The southern jet will be dipping into the Gulf and moving NE while the northern jet will remain further north keeping Arctic air from penetrating into the deep south as it has the last two years. Similar to last year, that strong southern stream will bring an almost nonstop succession of disturbances from the Pacific through the Gulf and up the east coast…Sounds eerily like a Nor’Easter! Unless we can get cold air in place when those arrive, count on a lot of rain.

One added feature will be a Blocking High over or near Greenland. This feature tends to allow that pent up polar air to make it south before winding out to sea. This one phenomenon is our problem. How strong will that High pressure system be and will it be strong enough to send polar air into the region? In past events, we have  seen this setup quite well so please keep this in mind…we may receive our annual allotment of snowfall in one storm!

Now, in the absence of brutal polar air, we will likely have more opportunities for ICE as Cold Air Dams setup. Again, this will depend on the strength of the Greenland High as well as any ridging coming from the plains into New England. With this steady stream of warm moist Pacific air being charged by the Gulf passing by, we have a better chance of being on the EDGE of cooler air than actually being in it. In this scenario, we have seen our fair share of Ice Storms.

It’s very important to note here that the forecast snow totals will be less if we receive significant Sleet/Freezing Rain.

What did we receive in past El Nino events?

Here are some selected storm details for the State from the NC State Climate Office Winter Storm Database for comparison. Click thumbnail for detailed information.

This winter season we do have higher chances of receiving a snowy winter, but with the pattern that is most likely to set up, much of that frozen precipitation will more often than not, be in the form of sleet and freezing rain. The one absolute guarantee is that our predominant precipitation type will be Cold Rain. Greenland Blocking should occur in the middle of the season which will give us better chances to see that cold polar air come down this way and then timing will be everything! As you may recall, last season we had an endless succession of storms but we couldn’t get the cold in when a storm was passing through. We did receive snow however…and like last year, we may get it all at once.

All it will take is ONE upper air disturbance from the Gulf coming into cold polar air to meet or even exceed the totals shown in this snow forecast. The pattern is there and for those that remember the winters of 57-58 and 65-66 this forecast is very similar.

We may tweak this forecast a bit between now and December, but we will most certainly review how this verified in March. Be sure to like, share, and forward.

Thanks for joining in and remember…