A thunderstorm is a local storm that produces lightning and thunder. Thunderstorms are often accompanied by showery rain and gusty winds, and may also bring hail or snow. Thunderstorms occur most frequently during the spring and summer, but they are also possible in the fall and winter. North Carolina experiences about 40 to 50 thunderstorm days per year. About 10 percent of thunderstorms are classified as severe – one that produces hail at least an inch in diameter, has winds of 58 miles per hour or stronger, or produces a tornado.

Tornadoes are nature’s most violent storms. Spawned from powerful thunderstorms, tornadoes can cause fatalities and devastate a neighborhood in seconds. A tornado appears as a rotating, funnel-shaped cloud that extends from a thunderstorm to the ground with whirling winds that can reach 300 miles per hour. Damage paths can be in excess of one mile wide and 50 miles long. Some tornadoes are clearly visible, while rain or nearby low-hanging clouds obscure others. Sometimes, tornadoes develop so rapidly that little, if any, advance warning is possible.

Know the difference between a WATCH and a WARNING 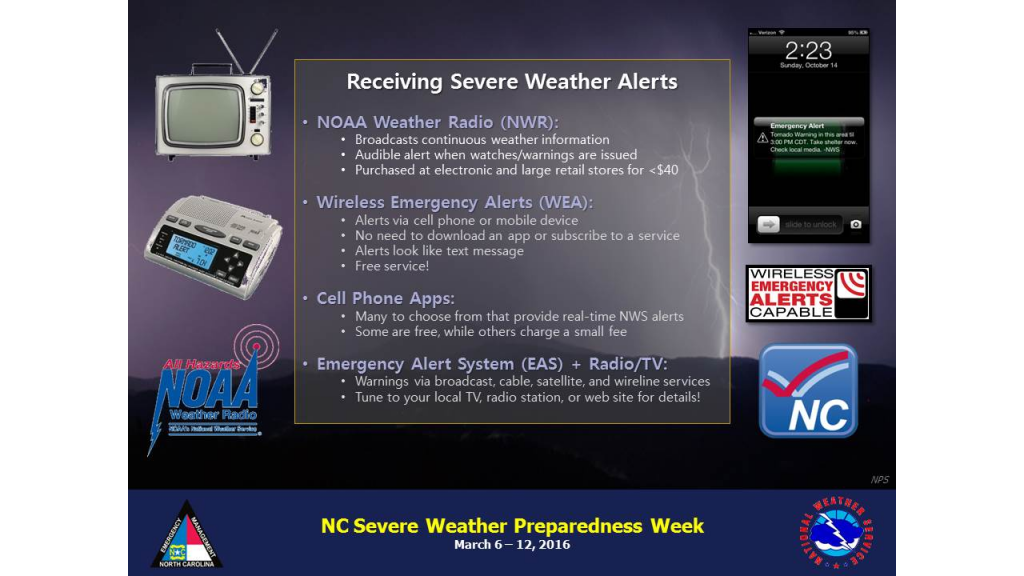 Ways to get breaking information

For more information, visit readync.org or our own preparedness page.