Our first in a series of winter weather opportunities begins Saturday December 20.

Now that we are approaching an event just inside of the 7 day “confidence zone”, we want to give you a heads up on the setup. Here is the customary Disclaimer…There is wide disagreement between varying models and even amongst their members so uncertainty remains high in the long range.

Beginning Friday, Low pressure with Pacific origins will dip south towards the Gulf of Mexico. Saturday, this strengthening Low will begin begin picking up all of that Gulf of Mexico moisture sending it north and east. By Sunday morning, the storm system should be centered along the Delmarva peninsula heading northeast.

The run-up to this potential event regarding temperatures is less than ideal. With near normal temperatures forecast through next week, and only a few nights for radiational cooling (clear calm skies and low temperatures at night) the ground temperatures are likely to be above freezing. The thickness values for the Piedmont favor cooling but only as the system approaches becoming more enhanced after it passes. In English, this means the upper atmosphere will support frozen precipitation about the same time as the storm arrives and definitely after. Will enough cold be in place when the storm arrives is our most important question and will define the Piedmont impact.

This is typical for North Carolina and usually indicates a winter mix of precipitation rather than an all snow event for most people. We expect to see snow in the mountains but depending where the track of the low sets up, there will be that Rain/Freezing Rain/Sleet/Snow line somewhere across our area.

The path a winter storm takes significantly effects the type and distribution of precipitation across the state.

A more inland path over NC typically results in:

This far out and with very little model agreement, it is too early to say who will get what and how much. All we can say is that this system needs to have your attention as this will be a high-volume travel weekend. 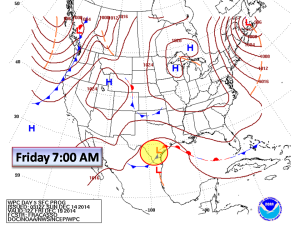 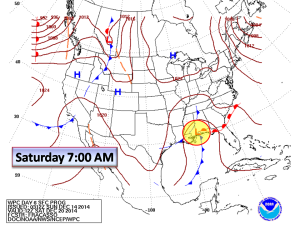 This is a developing situation and looks to bring some areas of the Piedmont some winter weather. It is too early to talk about accumulation as there is no model consensus. Everything is dependent on the track of this system and the timing of cold temperature arrival. Right now, there is a wide spread in what we could receive…Significant Snow event to All Rain for the Piedmont. NC Weather Happens will be monitoring…