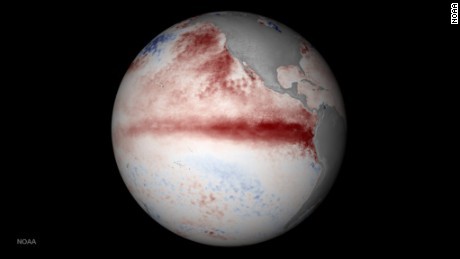 Winter is fast approaching and we are experiencing a very strong El Niño, so what does that mean for this winter in the Piedmont?

THIS IS NOT A FORECAST

By now, all the weather news you have received, has made some mention of El Niño. The news headlines range from “Epic Winter Forecast” to “Godzilla El Niño!!!” so before we dive into any kind of assumptions, we first need to understand what these guys are talking about.

According to the AMG Glossary of Meteorology, El Niño is defined as a “significant increase in sea surface temperature over the eastern and central equatorial Pacific that occurs at irregular intervals, generally ranging between two and seven years.”

Note the strongest ever recorded was in the winter of 1997-1998. We will take a look at that year in a moment but for now, the forecast for this winter’s El Niño looks to be historic in its strength as shown here:

This is why forecasters are chomping at the bit to be the first out of the gate with a seasonal forecast with such headlines as “Epic”, “Historic”, and “Godzilla”.

Before we go off half cocked about doom and gloom and empty aisles at the grocery store, let’s look at what typically happens in an El Niño winter.

3.  Not every El Niño means a cold and snowy winter.

Rather than discuss all the impacts of these teleconnections, a great resource for further study can be found here http://climate.ncsu.edu/climate/patterns/NAO.html

If you follow weather sites, the buzzwords for the season will be “AO-“, “NAO-“, and “AMO neutral”. At the time of this writing, the AO and the NAO are squarely negative and the AMO (currently slightly positive) is trending negative.

So what does all this mean? Regardless of whether we have an El Niño or not, they generally make for a cold and snowy winter when in a negative phase here in North Carolina. It is too early in the season to forecast whether these remain negative or begin a trend positive.

What does NOAA say?

First, let’s review last year to see how they did. This is the seasonal forecast that was issued in December compared with what was directly observed for Temperature and Precipitation from December 2014 to February 2015. (The temperature and precipitation observations are measured as departures from normal). 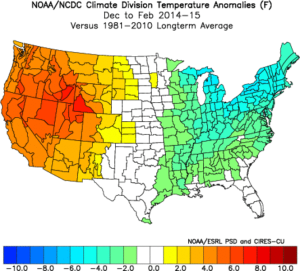 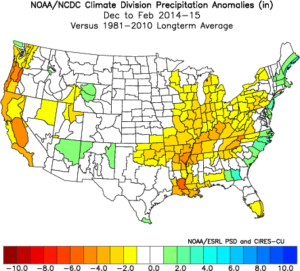 With a weak El Niño last winter, it looks like NOAA nailed the western states for Temperature but really missed the Northeast’s brutal cold winter. The precipitation forecast really didn’t pan out very well either but this is how models work and relying on one model will lead to great disappointment. Let’s dig further…

Comparing all events from 1952 to present, we see an increased likelihood for cooler, wetter conditions and snow in an El Niño winter.

Past El Nino Winters in NC:

Let’s take a look at some past El Niño winters and their impact on NC.

Some Scenarios to Consider:

There are many factors in play this winter that will certainly keep many forecasters up at night! In August, it is way too soon, and it would be irresponsible, to put a seasonal forecast out. However, as things look now, and based on historical events, we should expect a better than average chance of seeing snow with an even better chance of Ice especially later in the season. If you want a sure bet, it would be on rain an a nearly endless procession of Pacific systems travel across the southern states into the Carolinas.

As we get closer, we will certainly keep you in the loop.

If you are interested in advertising on this high volume webpage, please send us a note and we’ll send you some information.