With 61 today, where has winter gone? I want some snow darn it!

First, we have been watching the 22nd – 25th for almost 2 weeks now. When it first popped up in the medium range models, the new GFS came online (the 14th). It came out kicking and screaming too! 7 inches of snow on the 23rd! Taken with a grain of salt, the model was obviously picking up on something. Now here we are.

A northern low pressure system dives into to region about the same time a system from the 4 corners area taps moisture from the Gulf of Mexico. The 2 systems in such close proximity may phase together generating a strong Low pressure storm off the coast of NC travelling up the eastern seaboard. Meanwhile, moderating Canadian air attempts to filter into the area bringing us colder air.

Note: Based on our little survey the other day, the overwhelming majority liked this format without using all the technical weather-speak. Weather-speak is always available though!

Models began suppressing this southern stream system to the south and over the past 24 hours, has been bringing it back to the NW. Key to mention here is that the further it tracks to the south, the less moisture available in the Piedmont. If you want snow, then you want the track to be more NW.

For this event, there is an almost unprecedented model agreement but with some considerations…timing, temperature, and storm track. The European is on a more southern track giving the northern Piedmont the best chances to see some snow. The GFS is 12 hours later and has been trending back to the NW but does give some light snow opportunities. The largely useless Canadian model had a walloping Central Piedmont snow! 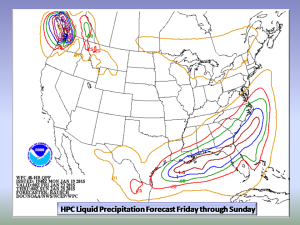 The Hydrometeorological Precipitation Center (HPC) forecast for liquid precip has been trending more N and NW. The Piedmont has about .25 inches of all liquid precip to work with . That equates to 2.5 inches of snow if it were frozen. This variable needs to be watched closely as it is a key indicator for the Piedmont. 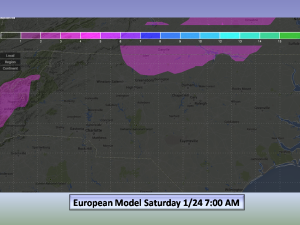 The European model has been everywhere! All snow, to nothing at all and warm. Now it is more inline with a developing off shore Nor’Easter.

GFS 1-4 inches snow in the Piedmont

The new GFS is performing quite well this season, but is still adjusting to the presence of the weakening Pacific ridge, with this last run there is a smattering of accumulating snow, but it comes in 12 hours later and is the outlier of the big three models for timing. Cooler air will be in place, so we can’t dismiss the timing issue.

The Canadian is the surprise model joining the Piedmont snow party. It has so many biases that it is almost useless in our latitude…BUT when something shows up, we need to pay attention.

The National Weather Service take on all this:

We have a very complicated weather pattern setting up. Will it snow? The chances are increasing with a more NW trend in the track of the developing coastal low on Saturday. We are “encouraged” with the trend towards a potential snow event in the Saturday – Sunday time frame but are cautious as there is a lack of significant cold air in place..especially before the storm’s arrival. IF we see more cold air filtering in…and IF we see a more NW track of the storm, then confidence will increase. Let’s get through the next couple of days and see how this pans out…

This is what everyone is looking at, so now you are in the loop. It’s too soon to make a forecast but that should happen around Tuesday. Keep the weekend on your winter weather calendar and keep plans for Monday morning flexible.

Be sure to get articles like this in your email by subscribing at ncwxhappens.com…its free, No ads, and No spam but more importantly, No delay!